The finance minister, however, insists the “meeting” was only a brief unscheduled encounter in parliament house and that he rebuffed attempts by the heavily indebted businessman to talk about his case.

New Delhi: In a revelation from Britain that has triggered a huge political controversy in India, fugitive businessman Vijay Mallya told reporters in London on Wednesday that he had met finance minister Arun Jaitley just before before leaving India on March 1, 2016.

The former head of Kingfisher Airlines spoke to journalists on his way to the Westminster Magistrates’ Court in London and revealed that he had told Jaitley he was willing to settle the issue of his outstanding debt with the banks concerned. 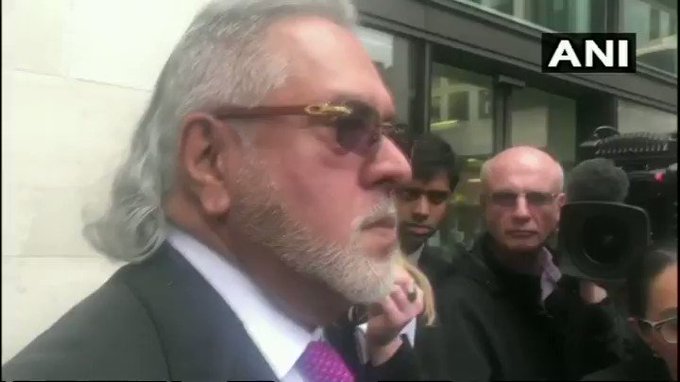 “I left because I had a scheduled meeting in Geneva. I met the Finance Minister before I left (India), repeated my offer to settle with the banks. That is the truth,” Mallya said, without naming the minister

Calling himself a “political football”, Mallya told reporters, “My conscience is clear. I put Rs 15,000 crore worth of assets on the table. I am a scapegoat. Both political parties don’t like me.”

This is not the first time that Mallya has hinted at meeting with the finance minister and the government being aware of his move to the UK. He has often shown frustration that the government refuses to acknowledge his offers of settlements and has asserted several times that he is just a victim of political manipulation.

Jaitley, who was in London in February 2017 while Mallya’s trial was going on, had told reporters there that the Indian government takes the issue of defaulters “very seriously” and that “because of the strong position that the government has taken, some defaulters were on the run” and “exploiting the systems in other parts of the world”. He then promised to raise such cases with his counterparts in the UK.

In a quick reaction to Mallya’s statement, Aam Aadmi Party leader and Delhi chief minister Arvind Kejriwal tweeted that people wanted to know what had transpired in the Mallya-Jaitley meeting.

Congress president Rahul Gandhi called Mallya’s allegation “extremely serious” and said Jaitley should step aside as finance minister while an independent probe into the matter is conducted.

Given Vijay Mallya’s extremely serious allegations in London today, the PM should immediately order an independent probe into the matter. Arun Jaitley should step down as FInance Minister while this probe is underway.

Kejriwal also replugged an old tweet by Subramanian Swamy in which the BJP MP – and known Jaitley-baiter – speculated about the possibility that Mallya had been tipped off and helped to flee:

Mallya could not escape from India because of a strong Look Out Notice for him at airports. He then came to Delhi and met someone who was powerful enough to change the Notice from blocking his departure to just reporting his departure. Who was that person who dilute this LON?

Kejriwal drew attention to the fact that the “lookout notice” against Mallya had been changed from ‘detain’ to just ‘inform’, thus enabling  him to fly out of India unimpeded:

In whose instructions was CBI’s notice changed?

Other opposition leaders were equally scathing. Yashwant Sinha, a former BJP finance minister but now a strong critic of the Modi government, tweeted:

Not only the finance minister, the entire BJP must come clean on its relations with Vijay Mallya.

On Wednesday evening, Jaitley put out a quick statement on Facebook, noting that the meeting Mallya spoke of was in fact an unscheduled encounter in the Rajya Sabha.

“Since 2014, I have never given him any appointment to meet me and the question of his having met me does not arise. However, since he was a Member of Rajya Sabha and he occasionally attended the House, he misused that privilege on one occasion while I was walking out of the House to go to my room,” the finance minister said in a Facebook post.

“He paced up to catch up with me and while walking uttered a sentence that ‘I am making an offer of settlement’. Having been fully briefed about his earlier ‘bluff offers;, without allowing him to proceed with the conversation, I curtly told him “there was no point talking to me and he must make offers to his bankers.” I did not even receive the papers that he was holding in his hand. Besides this one sentence exchange where he misused his privilege as a Rajya Sabha Member, in order to further his commercial interest as a bank debtor, there is no question of my having ever given him an appointment to meet me,” he added.

Reuters reports: The Indian government has failed to provide any substantial evidence to justify Mallya from Britain to face fraud charges, his lawyer told a London court on Wednesday.

India wants to extradite 62-year-old Indian businessman from Britain to face criminal action relating to loans taken out by his defunct Kingfisher Airlines and Indian authorities want to recover about $1.4 billion they say Kingfisher owes.

In her closing submission, Mallya’s lawyer Clare Montgomery told London’s Westminster Magistrates Court that India had failed to provide enough evidence to form a “prima facie” case against him necessary to warrant his extradition.

“It’s undermined and set to nought by their own evidence,” she said.

The Indian government says Kingfisher took out a series of loans from Indian banks, in particular the state-owned IDBI, with the aim of palming off huge losses which Mallya knew the failing airline was going to sustain.

It argues Mallya, who moved to Britain in March 2016, had no intention of repaying money it borrowed from IDBI in 2009 and the loans had been taken out under false pretensions, on the basis of misleading securities and with the money spent differently to how the bank had been told.

Mallya, however, denies the allegation made by the Crown Prosecution Service on India’s behalf that he had intended to default on his loans.

“We poured over Rs 4,000 crore into Kingfisher Airlines to keep it flying.”

Montgomery told the court that “there was no benefit for Mallya to fail Kingfisher Airlines”. She iterated that IDBI lending was “genuine” and “this was a commercial lending for Kingfisher Airlines to run as a viable business and not as prosecution claims to defraud” and put the onus on “world economic downturn” for the airlines’ downfall.

Montgomery said the evidence she and the Indian government had provided showed Kingfisher (KFA) had been clear about what the loans were for – to secure the airline’s viable future – and that it had been open about its losses.

“Full and complete and accurate information was provided and I can demonstrate that,” Montgomery said, saying suggestions that there was a “secret package of knowledge” about Kingfisher’s financial position which was not provided to IDBI were “utterly unfounded”.

She said the Indian authorities had relied on testimony from people who were not involved at the time of the loans and they had failed to show any false statements had been made.

“The idea that this was a carefully thought out dishonest strategy promoted by him in the knowledge that KFA was bound to fail is just nonsense,” Montgomery told England’s Chief Magistrate Emma Arbuthnot who will decide the case.

“This is a financial disaster for him as much as the banks.”

The Indian government’s Enforcement Directorate, which fights financial crimes, is seeking to declare Mallya a “fugitive economic offender” and to confiscate Rs 125 billion worth of his assets.

Mark Summers, the lawyer acting for the Indian government, said it was not their case that Mallya had taken out the loans intending that the airline should fail, but his intention was if it did, he would not have to repay them. Summers alleged that what KFA knew internally “was radically different” to what was told to the banks.

He said the optimistic message Kingfisher had given the bank about its future when it took out the loan was not even vaguely consistent with a much more downbeat internal assessment.

Montgomery then told the court that there is “no evidence” that Mallya knew the value of securities were overstated.

District Judge Emma Arbuthnot had earlier also requested India to provide a video of Barrack 12 in Arthur Road jail in Mumbai, where Mallya will be shifted to upon extradition, after Montgomery alleged that the photographs supplied were not conclusive evidence of the conditions of the jail.

After the prosecution provided the video, the and the judge watched it three times to ascertain the lighting conditions in the cell. Montgomery said that there was some evidence to show that Barrack 12 had been freshly painted to achieve the requisite amount of brightness. Calling it a “steel oven”, Montgomery made a case for a prison inspection.

The case is due to conclude on Wednesday with Arbuthnot expected to deliver her decision at a later date.